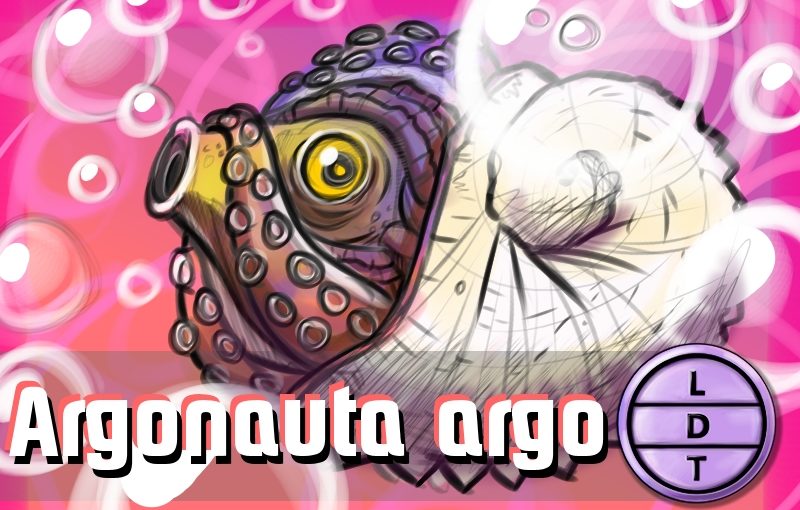 “And today we’re talking about a nautilus that isn’t actually a nautilus at all, but it is a Greek mythological hero. More on some of that later.”

You may have heard of Alexander the Great’s famous diving bell, but he was far from the first earthling to explore the depths with trapped air. Putzing around the ocean in a paper-thin shell, the argonaut has a sophisticatedly simple way of staying buoyant. But nothing gets this odd octopus down here in LDT.

Welcome to the beloved Measure Up segment. The official listener’s favorite part of the show! The part of the show when we present the animal’s size and dimension in relatable terms through a quiz that’s fun for the whole family. It’s also the part of the show that’s introduced by you when you send in audio of yourself saying, singing, or chittering the words measure up into ldtaxonomy at gmail dot com. We have a new measure up intro this week from Doug from Seattle!

Hey everyone, Carlos here. The argonaut may use trapped surface air to stay buoyant, but you know what keeps us afloat? Reviews! People may see our show on a list, but how will they know that it’s full of truly interesting animal info unless you tell them? They’re definitely not going to believe us, so we need your help! Just log onto your favorite podcasting app, search Life, Death, and Taxonomy, then scroll until you see the option to leave a review. Tell us what you think, how much you love the show, or what you think we could do to improve. Thanks for listening and we’ll see you next week!